“What’s glaringly missing in the headlines is that in 1970 the S&P 500 lost 21% in the first six months but recovered 27% in the second half. And that’s not the only example of significant second half turnarounds.”
– LPL Research Note to advisors on 6/30/2022.

More noteworthy even than the extent of the decline was its gathering violence in mid-June when the market ran off a streak of five out of seven trading days during which 90% of the S&P 500 stocks closed lower. This is one-sided negativity on a historic scale. According to LPL, the S&P 500 declined more than 5% each in back-to-back weeks in mid-June: something that’s only happened seven other times since WWII.

And now you can probably guess what I am going to say: historically, the best way to destroy any chance for lifetime investment success has been to sell one’s stock holdings into a bear market. Selling when everyone else is selling must strike us as the height of foolishness. It might feel good in the moment to sell, but these are generally mistakes from which investors never recover. Think of it another way as succinctly stated by one of my long-term mentors: stocks are returned to their rightful owners during bear markets.

As previously stated in these emails – and why stock prices are suffering so much – market participants are primarily concerned that the Federal Reserve will raise interest rates too high and drive the economy into recession.[2] If they do, then so be it. There is nothing to be done about it. And we certainly would prefer a temporary recession and another 10% to 15% drop in stock prices rather than the scourge of sustained and elevated inflation. Rather than focusing on recession or where things might be headed in the short-term, it is my mission to help you stay focused on the goals set in your financial plans while allowing dividends on your stocks to be reinvested at lower prices. And if you’re still working, even better…each contribution to a retirement account is buying shares at a lower price. Remember – and we are VERY disciplined in this with financial plans – you do not need to liquidate ANY stocks in your portfolio for at least seven years. So why on earth would it matter if we go into a temporary recession?

Why Inflation Is Probably Peaking

Let’s move on to the good news. The enormous growth rate of money in the economy (“M2”) that caused the inflation is now crashing down. The May number was released on June 28th.[3] And it was beautifully low. We have now strung together four impressive months of low money growth that has now averaged only 1.8% annually. For context, M2 averaged around 6% annual growth each year prior to Covid, and we were solidly over 10% growth in the first quarter of this year. It’s been an impressive turnaround the last 3-4 months.

The current money in the system is still out there, so inflation will persist for a time. And there are certainly energy, food, materials, war, labor, and supply-chain issues that will linger. But the main driver of inflation is now turning the other direction. My Inner Optimist likes what he’s seeing for the first time in months. 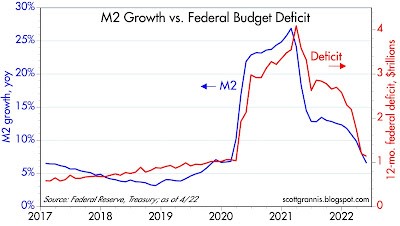 According to Scott Grannis (where I got the chart above), this is the “most important chart in the universe right now.” M2 exploded right along with government spending, and, well, you don’t need a PhD in economics to figure that one out. The only thing surprising is that the PhDs at the Fed were surprised by the inflation we got. The Fed and the government did a cash dump into the system at a time when supply was crimped by Covid and simply couldn’t keep up with demand.

It’s not entirely clear what the Federal Reserve will do with interest rates going forward. Three months ago, I would have said that a “soft landing” by the Fed was near a zero probability (meaning that inflation is brought meaningfully back under control without triggering a recession). I’m reluctant to put a probability on it now, but I think it’s more than a mere possibility – it might even be approaching probability. Economic growth is clearly slowing in the economy. At some point, this should slow inflation, especially when combined with slower money growth. As mentioned in my last post, there is a lot to like in the economy from strong company earnings estimates to strong consumer and business balance sheets to a low unemployment rate.

We’ll know more in the next month or two as companies report second quarter earnings and, perhaps more importantly, provide guidance on how inflation is impacting their businesses. If companies have a tough time handling inflation and guide earnings estimates lower, then we are probably in for some further pain. But if we get solid earnings reports along with any positive inflation data, then perhaps the Fed backs off a bit on interest rate increases…that could be very good for markets.

My Inner Optimist is waking up. Stay patient, stay disciplined, and stay invested.

[1] The beginning of the downturn in growth stocks started in February of 2021, accelerated in November of 2021, and hasn’t stopped. Growth stocks are more sensitive to inflation and rates because the cash flows from these companies are further out into the future. If you took a finance class in college, remember one of the main finance principles: would you rather I pay you a dollar today or a dollar tomorrow. The answer is always today, because it’s worth more. And this is especially true in an inflationary environment when that dollar would be worth even less in the future.

[2] As an aside, bondholders are more concerned about inflation than recession. Inflation erodes the real value of future interest payments. In a recession, a bondholder is concerned about default, but they are higher in the corporate capital structure and would get paid prior to stockholders.

The opinions voiced in this material are for general information only and are not intended to provide specific advice or recommendations for any individual. All performance referenced is historical and is no guarantee of future results. All indices are unmanaged and may not be invested into directly.

The economic forecasts set forth in this material may not develop as predicted and there can be no guarantee that strategies promoted will be successful.

The information contained in this email message is being transmitted to and is intended for the use of only the individual(s) to whom it is addressed. If the reader of this message is not the intended recipient, you are hereby advised that any dissemination, distribution or copying of this message is strictly prohibited. If you have received this message in error, please immediately delete.